Marci Lynn McGuinness is a dynamo when it comes to recording the legends of the Ohiopyle, Pennsylvania area.

From coal barons to congressmen to early race car drivers and railroad agents, McGuinness is turning legends from her 40 books into screenplays. Ride along! 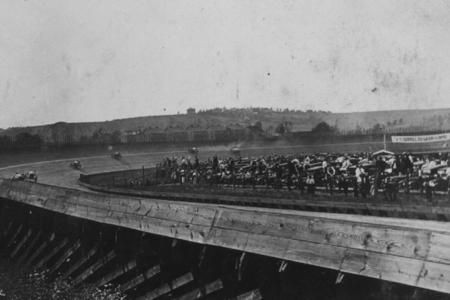 Join me on Linkedin!

The mile and an eighth oval Uniontown Speedway attracted crowds of up to 50,000!

Third from right: Barney Oldfield. To his immediate right, his protege: Tommy Milton. 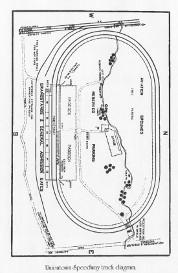 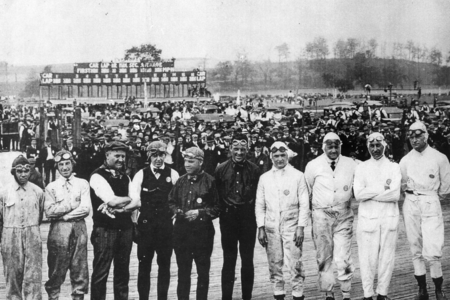 Title: SPEED KING
Genre: Period Drama (Inspired by a True Story & McGuinness' books)
Log Line: Seamus McBay sets speed records and builds America's fastest race track out of wood, but when he can't win silent film star, Winnie Boyd Lewis, he takes her money and runs to Cuba.  (1916 – 1922)
Budget: By using Visual Effects for the crowd and crash scenes, the budget for this historical film can be reduced drastically.

Title: CONJOINED
Genre: Thriller
Log Line: Liz's brain is secretly unconjoined from Siamese twin, Heidi. Liz becomes a homicide detective no killer can out-think. When their DNA is found at a murder scene, Liz fears the blind nun sister she adores is killing lookalikes, until they meet their brother.
Budget: $15 Million or less.

Title: GUILTY OF SELF DEFENSE (In Progress)
Genre: Drama/True Story
Log Line: Would you put an innocent person in prison just to get home for Christmas? They did.

Title: MESSAGE OF THE SACRED BUFFALO
Genre: Animated/Children
Log Line: A sacred white buffalo is born in Pennsylvania where no male buffalo exists. Lakota Indians journey here, hold ceremonies and conclude their prophecy of the legendary White Buffalo Calf Woman has come to bring the world together.

True stories have been my niche for many years, and adaptations have become a specialty.

Excellent references and rates upon request.

Marci Lynn McGuinness is the World Expert on the Uniontown Speedway Board Track,                    and owns the rights to several more true stories. She celebrates 40 years of publishing in 2021.

2020 -  Co wrote an adaptation of a popular BC book with a Canadian 5x Emmy Nominated Visual Effects Producer.

2020 – McGuinness is currently writing a screenplay based on a true story. Drama: “Guilty of Self Defense”.

2020 – Interviewed by Kirk Leidy & Associates of Altoona, PA for the board track documentary, Dancing with the Devil. A 22 minute version of the docu has been submitted to the Ken Burns Film Fest for the National Archives. We are re-filming our interviews (mine and the Indy museum guys) in September for a full documentary on the 24 board tracks to be launched at Indy or Watkins Glen.

2020 - Took a Horror class and a Scene Master class at Screenwriting U. Wrote a Horror short, DAME FORTUNE.

2019 – Graduated from the (21 month) ScreenwritingU Master Class where I rewrote Speed King. I also took their Thriller Class and wrote a Psychological Thriller feature, CONJOINED.

2015 – Published Laurel Highland Legends with a chapter of photos recently discovered at the Summit Resort Hotel where all the drivers stayed. (Chevrolet, Oldfield, etc.)

2015 – Published e book/story – Vivian and the Board Track Boys.

2012 – Joined Gary Shusetts in Hollywood and pitched 18 producers. Gary was very interested in Speed King. He contacted me after I went home, saying he had a history producer with money who was interested. He wanted to rewrite to script with me, but died 4 months later from cancer.

2011 – I published Speedway Kings of SW PA, 100 Years of Racing History. Through the years I learned so much more about the people involved in the track and collected hundreds more photographs, another book ensued!

2009 – Reformatted Yesteryear at the Uniontown Speedway for a new paperback edition and listed it on Amazon, etc.

2008 – Wrote the first draft of the script, Speed King, inspired by my Summit Mountain Hill Climb and Uniontown Speedway board track books and research.

2008 – Launched the magazine, Around Ohio Pyle.

2002 – 2007 - Moved to the Chesapeake Bay for 5 years. Changed the name of my publishing company to Shore Publications. Wrote a column for Spin Sheet Sailing Magazine (On the Shore with Marci McGuinness) and became Managing Editor at Cornell Maritime Press/Tidewater Publishers.

1998 – 2020 - Wrote and published a book per year and several magazines during these years.

1997 – Printed a landscape formatted paperback edition of Yesteryear at the Uniontown Speedway with high gloss paper.

1996 – Reprinted the 1916 Official Program from the Preliminary Opening Race of the Uniontown Speedway board track.

1996 – After two years of interviewing old racing enthusiasts in basements, garages and dens, perusing their collections, searching countless news articles and organizing the information, I wrote the fifth book in my “Yesteryear” series of pictorial history books, Yesteryear at the Uniontown Speedway. It was a limited edition, signed leather bound high gloss paper.

1993 – Collector Jim Boyd of Jockey Hollow, PA called and asked me to meet him in his basement saying, “I want to show you something.” His elderly arms were loaded with photographs, old newspapers and programs from the Summit Mountain Hill Climbs (1913 – 1915) and the Uniontown Speedway board track (1916 – 1922). I had never heard of them.

He refused to show me what he had until I promised to do something with the information. “This is important. No one has ever researched this.” I promised.

1992 – 1996 – Published the Yesteryear series of six vintage pictorial books and many historical calendars.